Scout Gang Shows have existed for many years, based on the original ideas of Ralph Reader CBE whose shows were performed in London and in provincial cities and towns across the country. It is now said that ‘Every night of every year, somewhere in the world a Gang Show is playing’. Tonight is our night! Maidstone was one of these provincial towns and had a Gang Show as early as 1939! The aim of Gang Show has always been to develop a sense of belonging, to encourage team spirit, increase self confidence and to provide an atmosphere of enjoyment and fun. It also introduces and develops stage skills to present a positive image of Scouting in the community.

During the war the Maidstone Gang Show was laid to rest only to be re-born in 1969 when a trial show was performed during the District AGM at Oakwood Park School. 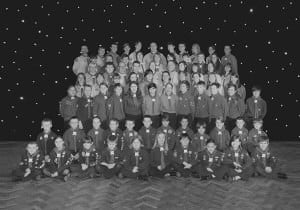 In 1970, Tony Palmer produced the first full Gang Show. This was the first of many shows to be performed at our present home, Maidstone’s Hazlitt Theatre. These shows were traditional Ralph Reader Gang Shows using only his original songs, sketches and an all male cast!

Click on the dates in red for a pdf of the programme.

It's the only way to get involved in Gang Show!