So the curtain has come down on the 2011 show. Below are some of the comments shared with us, thank you everyone for your continued support. Maidstone Gang Show will be back 2013!

“We all had a really brilliant evening from start to finish! The best so far kept us on the edge of our seats all through.” – 2011 Show Audience Member 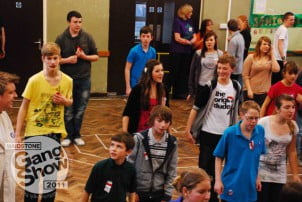 “Please add my congratulations to the long list you must have received and pass them on to the ‘Gang’. I thought that it was an absolutely brilliant, marvellous and outstanding production and I am more than a little bit impressed with the Maidstone team. From the start with the very rousing National Anthem to when the curtain dropped, the smile didn’t leave my face. The enthusiasm of ‘The Gang’ was infectious and their energy could keep the national grid running for weeks. No false ‘stage smiles’ at Maidstone, the audience could see that the beaming faces on stage were genuine delight and that was joy in itself. The content of the show was awesome and on the way home we tried to decide on the best bit, but in the end we concluded the whole show was the best bit.” – 2011 Show Audience Member

“7 months ago 90 individual cub, scouts, explorers and leaders embarked on rehearsals, but last night there was just ONE gang!” – 2011 Show Audience Member

“I enjoy doing the show because I enjoy see everyone having fun.” – 2011 Cast member

“I do it to prove to myself, family and friends that I can perform on stage.” – 2011 Cast member